Posted on January 25, 2016 by Get Up and Go Admin in Testimonials

Thank you so much for developing this fantastic product. My friend nobly gave me one bottle of her dog’s tablets and was effusive in her praise, so I thought why not?

My dog suffers from arthritis and had been in pain for some time. After a month on the tablets her mobility was much improved.

After two months she is a different dog – energetic again and keen to go for a run instead of a creaky, uncomfortable, very short walk.

Give your dog a purpose

PART 3:  GIVE YOUR DOG A PURPOSE

Our dog, Cotton, had always felt that he was the protector of the castle and the family.  But as he got older, he didn’t do his usual bravado when greeting guests and didn’t walk the perimeter to check for intruders.

About that same time, my father entered his 80’s and I found that if I gave him something to look forward to, he was so happy!  We all like to have a purpose and another purpose besides sitting around the house.  For my father, I would plan excursions, events, or activities and planned them months in advance so that he could plan, think and get excited about whatever it was that we were doing.

1.  It is a myth that dogs are color blind. They can actually see in color, just not as vividly as humans. It is akin to our vision at dusk. (Funny Fidos)

2.  Petting dogs is proven to lower the blood pressure of dog owners. When humans and dogs interact, both release “oxytocin” – also called “the hormone of love” which reduces stress.

3.   Dogs have three eyelids. The third lid, called a nictitating membrane or “haw,” keeps the eye lubricated and protected.

4.  Dog nose prints are as unique as human finger prints and can be used to identify them.

6.  Dogs, like humans, read facial expressions from left to right (because we make expressions a-symmetrically). However, dogs do not read eachother’s faces left-to-right and no other animal has been discovered to read faces in this way. (passion4pits)5.  Dogs don’t like rain because the sound is amplified and hurts their very sensitive ears. (Funny Fidos)

7.  Dogs pant a lot because they have no sweat glands on their body except at their paws. 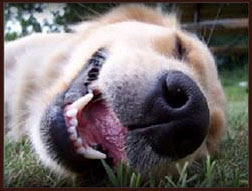 8.  Touch is the first sense a dog develops. A dog’s whiskers are touch-sensitive hairs called vibrissae. They are found on the muzzle, above the eyes and below the jaws, and can actually sense tiny changes in airflow. (Funny Fidos)

9.  A dog can locate the source of a sound in 1/600 of a second and can hear sounds four times farther away than a human can.  (Airy Pines)

10.  Ancient Egyptians revered their dogs. When a pet dog would die, the owners shaved off their eyebrows, smeared mud in their hair, and mourned aloud for days.  (randomhistory) 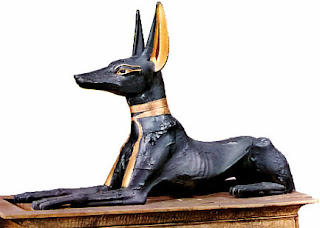